The Glory of England & Wales: A Tour of English & Welsh Country Houses and Gardens

In May of 2012, led daily by the divine Gareth Williams, we experienced some of the best historic houses in England and Wales. We were based at Weston Park, the sublime 17th century Shropshire country house of the earls of Bradford, where we were the only occupants. Weston is known for its fine art collection, including furniture by Thomas Chippendale, a superb set of Gobelins commissioned for Weston, and canvases by Holbein the Younger, Thomas Gainsborough, Joshua Reynolds, George Stubbs, and Anthony van Dyck (there are six van Dycks in the Dining Room).

We had a curator-led tour of Wales’s grandest country home, Powis Castle. Originally built by Welsh princes in the 12th century, the castle sits high above the town of Welshpool and is world famous for its terraced gardens. Much-altered and enlarged in later centuries by the earls of Powis, the castle today contains one of the finest collections of paintings and furniture in Wales.

Willey Park is possibly Shropshire’s most spectacular country house. The little-seen and very private early 19th century house was the masterpiece of its architect, Lewis Wyatt, and is still lived in today by the family for whom it was built. Willey is famous for its central hall, an exceptionally grand space in the style of a galleried basilica of ancient Rome. Here Lady Forester gave us a tour, followed by a lovely tea in the conservatory.

Then it was off to the two Stokesays: the medieval Stokesay Castle, today a property of English Heritage, and the private 19th century Stokesay Court. Stokesay Castle is the earliest and best-preserved surviving fortified manor house in Britain. Built for the wealthy wool merchant Lawrence de Ludlow in the late 13th century, the castle marks a time when fortifications were giving way to the comfortable manor house way of life, providing a transition from the fortified castle to the comfortable country house. One of only three houses ever built by the Victorian architectural theorist Thomas Harris, and the only one to remain in family hands, Stokesay Court is an enormous Victorian house that today remains a private home. Here we were hosted by Caroline Magnus, who gave us a tour of her home, followed by a delightful lunch. 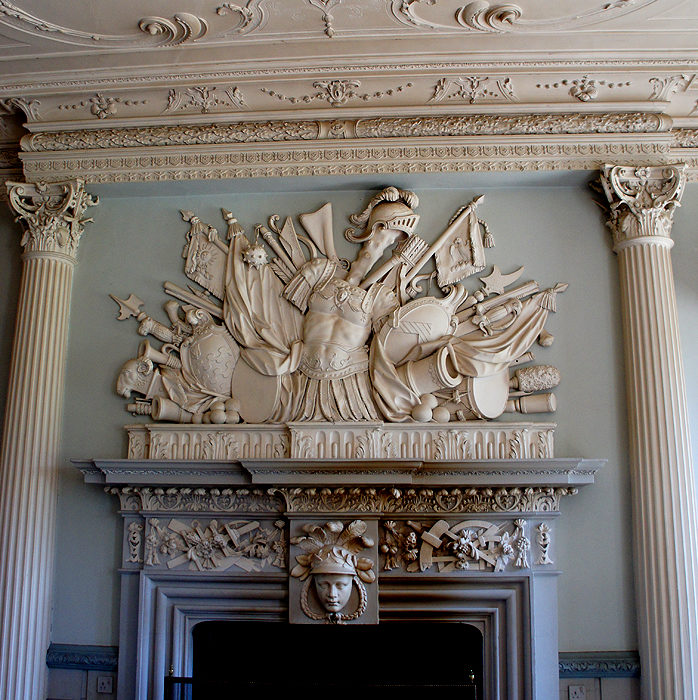 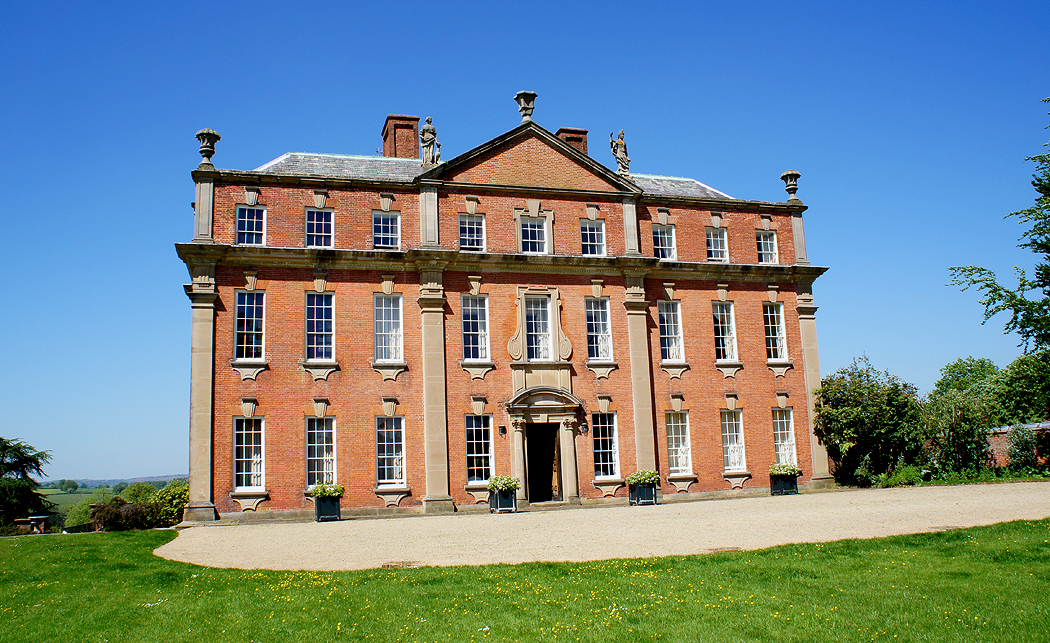 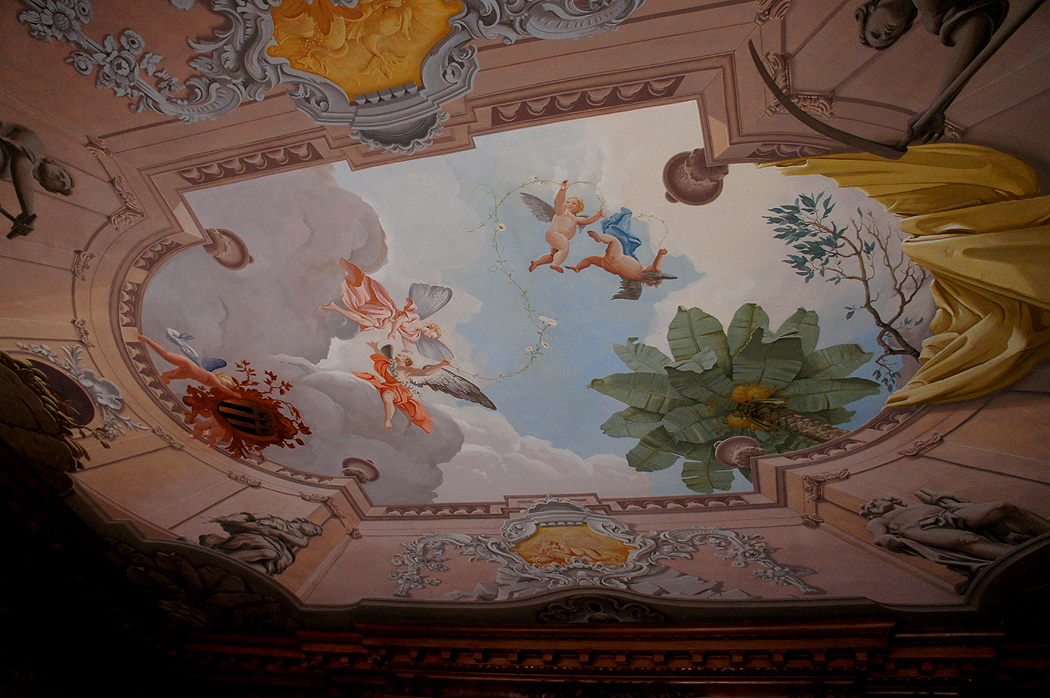 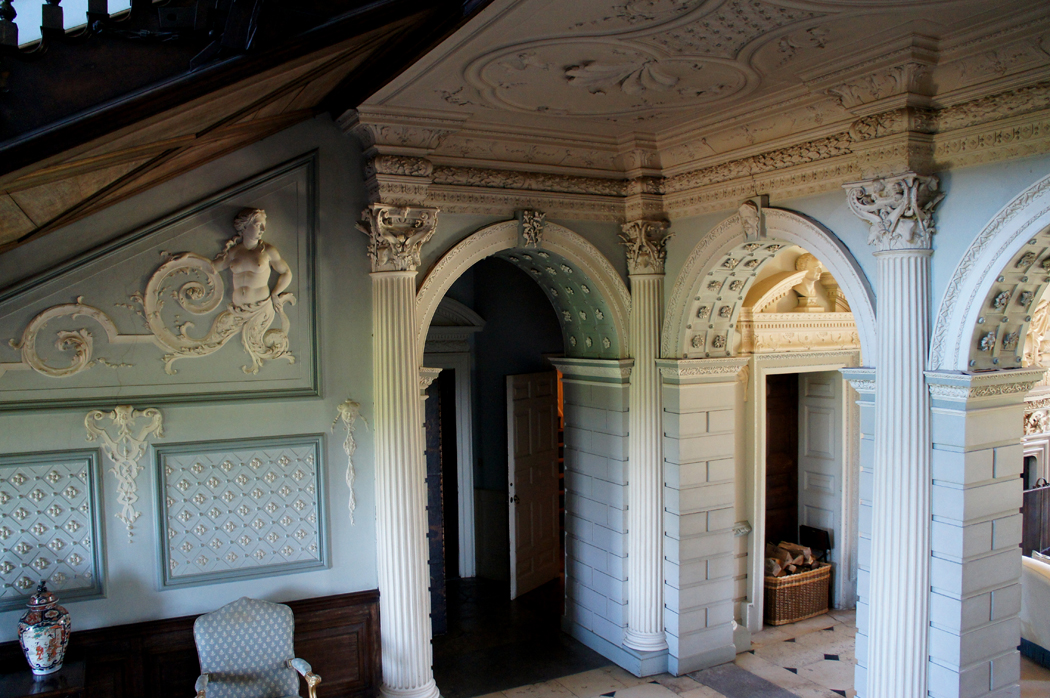 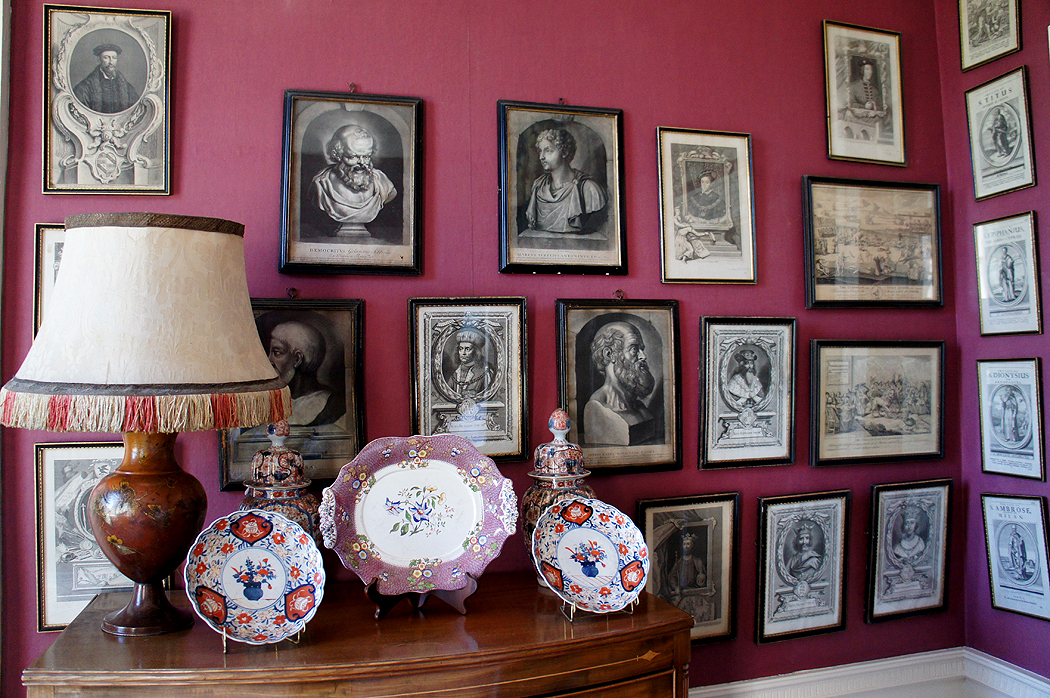 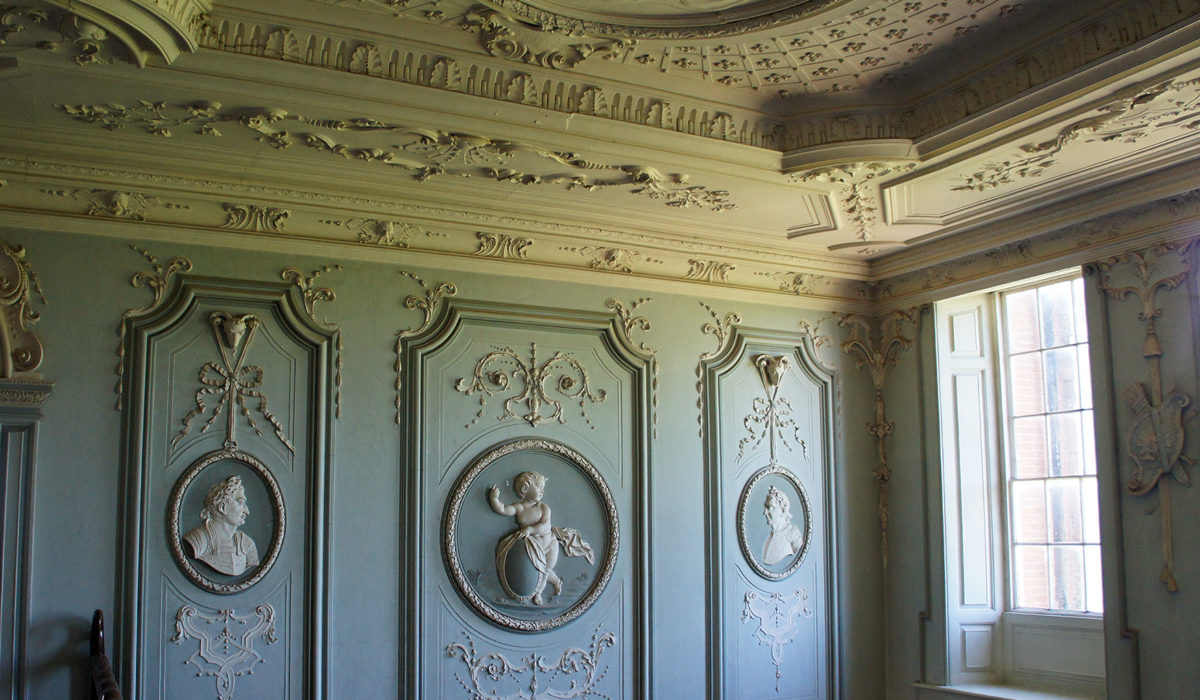 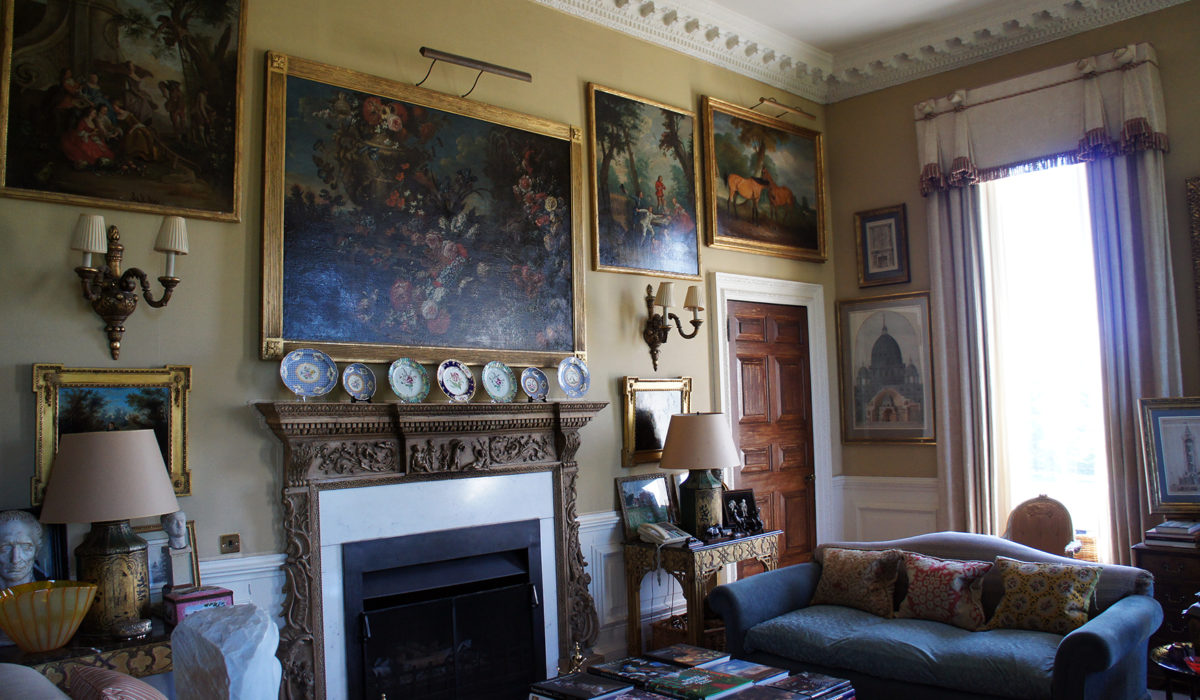 Positioned in the center of a great park landscaped by Capability Brown, the red brick Chillington Hall is approached today, as it was in the 18th century, by a great oak avenue. Owners John and Cres Giffard led a tour of their historic home (Giffards have been here since 1178), which ended with drinks and a glittering dinner in the state dining room.

The next day began with Attingham Park, built in the 1780s for the 1st Lord Berwick and home of the world’s first top-lit picture gallery. Here, at the most famous historic house in Shropshire, we were given the privilege of a curator-led tour of the house and its treasures before it opened to the public.

Then it was off to Cronkhill for lunch. Situated on the Attingham Estate, Cronkhill is a circa 1805 cottage orné that was built for the 2nd Lord Berwick’s agent (estate manager). Meant to evoke a grand Tuscan farmhouse, Cronkhill is the best-known example of John Nash’s Italianate villas and a poster child of the Picturesque movement.

I didn't know houses like Willey Park existed! It was like walking into the grandest London club crossed with an art museum and a Roman temple.

Some of the most magical moments were at Hatton Grange, where owners Rupert and Christina Kenyon-Slaney gave us a relaxing tour of their delightful 18th century family home, followed by tea and Pimm’s in the garden. Hatton Grange, almost a giant dolls’ house, is a perfect red brick Georgian house that was designed by Thomas Farnolls Pritchard, architect of the world’s first iron bridge.

At Longner Hall, Gil Burton enchanted us with a tour of her family’s home. Though Burtons have been here since the 14th century, they built the current (“new”) house in the early 19th century. The Tudor-Gothic style house designed by John Nash features Regency interiors dripping with fan vaulting and stained glass windows, all set in a park above the River Severn designed by Humphry Repton.

Tim Reynolds hosted us at Patshull Hall, the exceptionally grand 18th century house that was the ancestral home of the earls of Dartmouth until 1958. Patshull is noted for its outstanding plasterwork, particularly in the saloon, where swags, ribbons, wreaths, fruit, and flowers were executed by the Italian stuccoist Guiseppe Artari. Here Tim hosted us for a tour of the state rooms, followed by a lovely lunch.

Upton Cressett Hall, an Elizabethan brick house that encases an earlier timber-framed 15th century building, is a remarkable survival. Accessed via the most narrow of country lanes, this historic house was probably originally built for Hugh Cressett, high sheriff and MP for Shropshire, in the 1430s and 1440s. Here the current owner, William Cash, gave us tea, cakes, and a tour of his remarkable house. 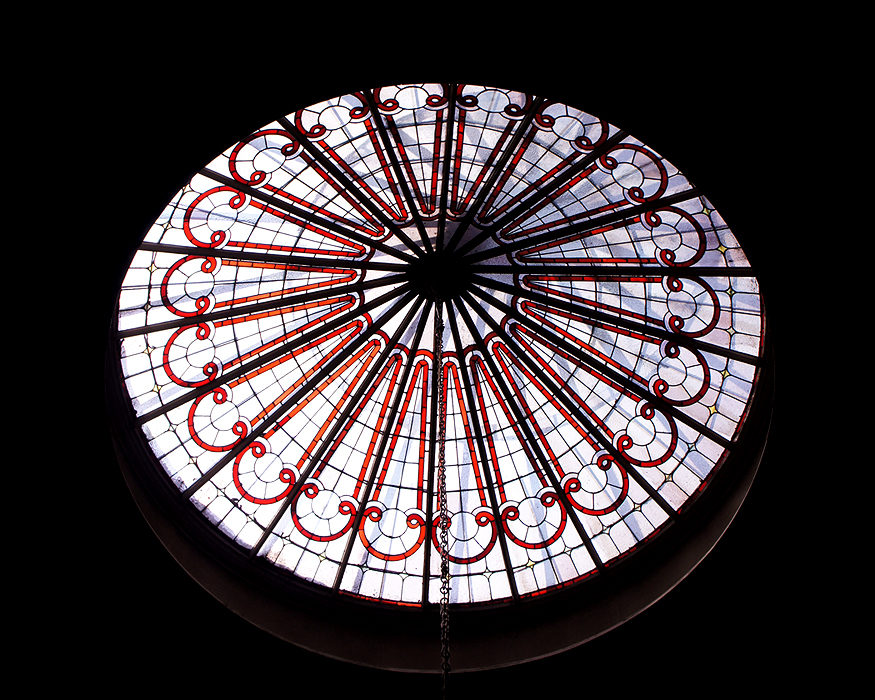 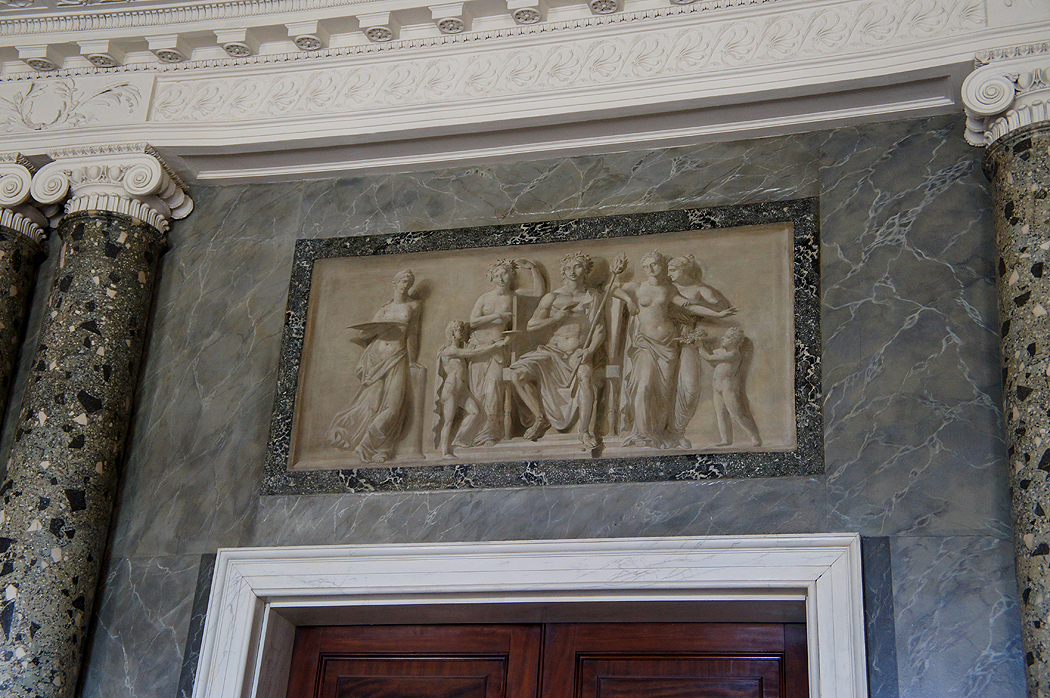 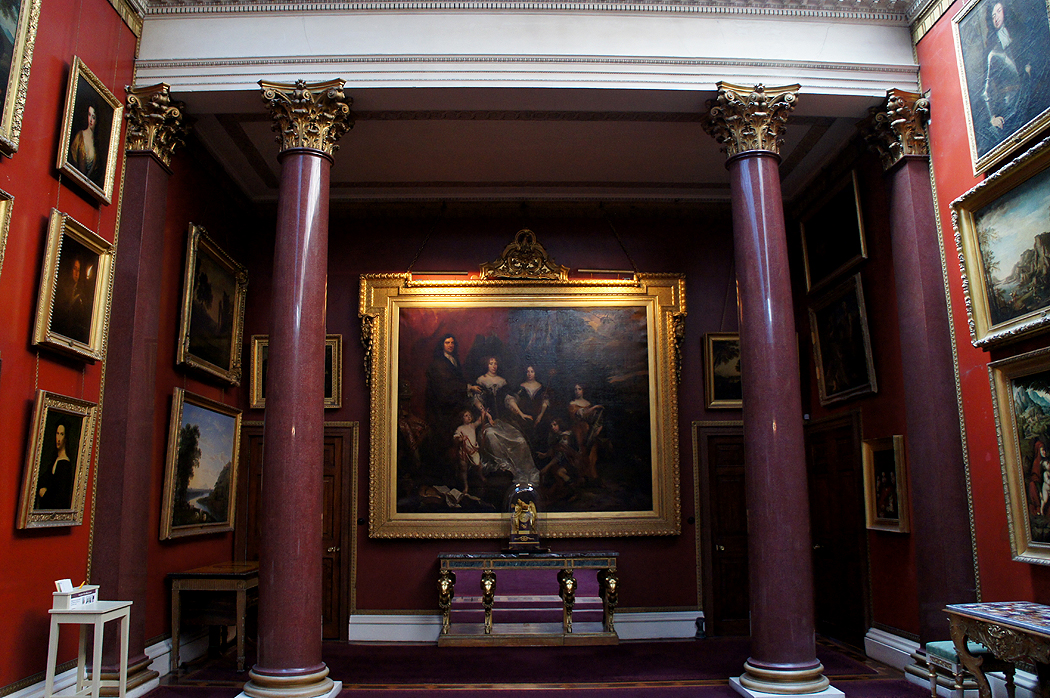 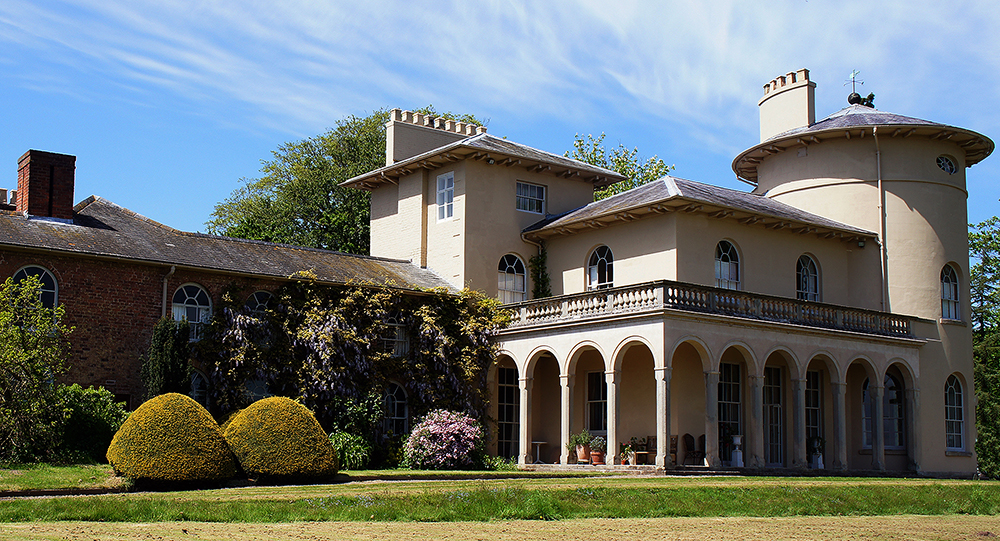 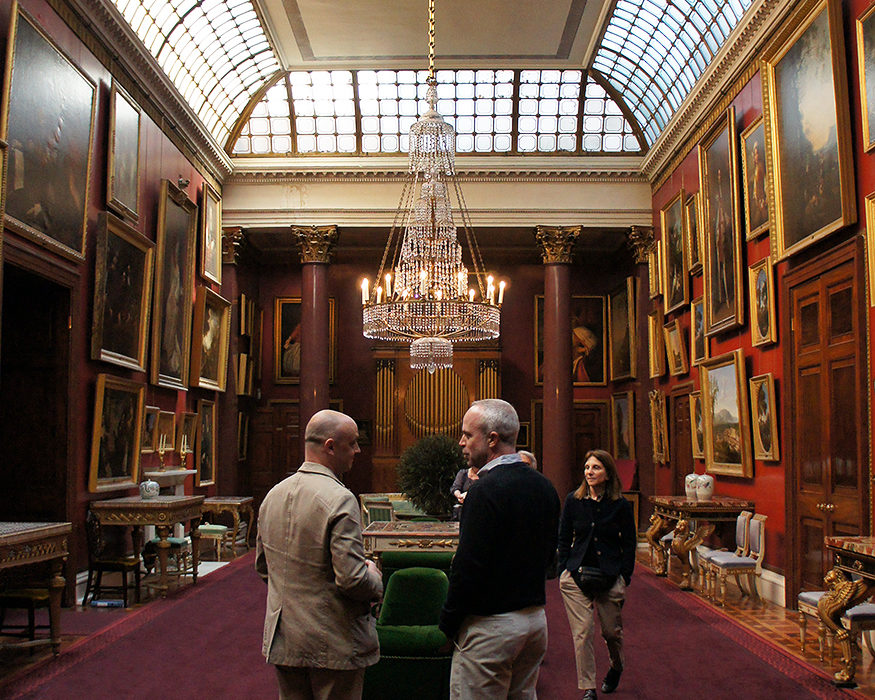 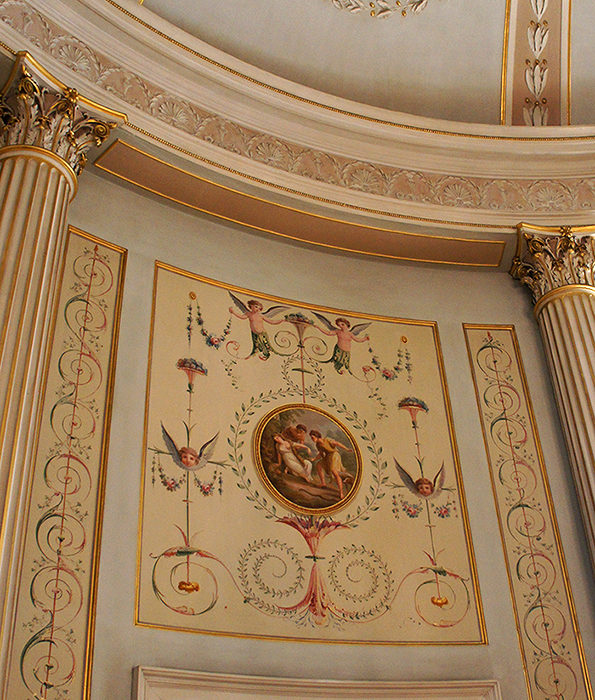 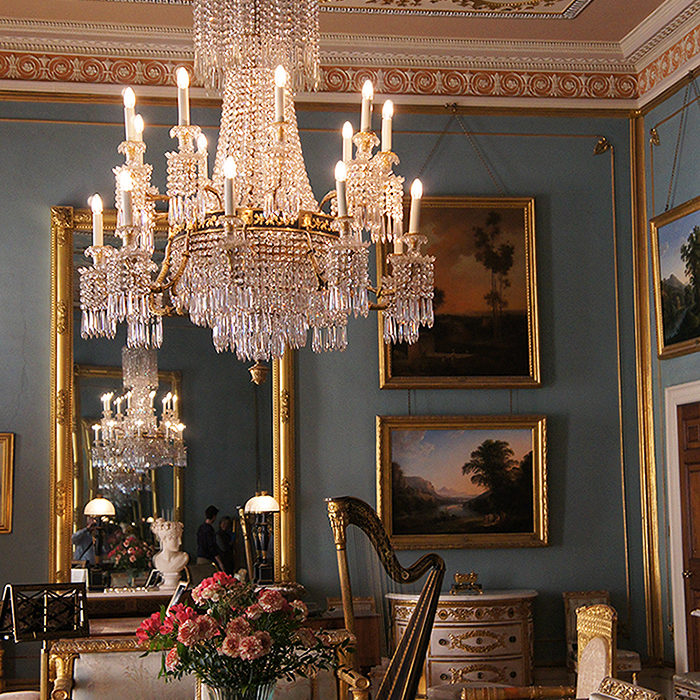 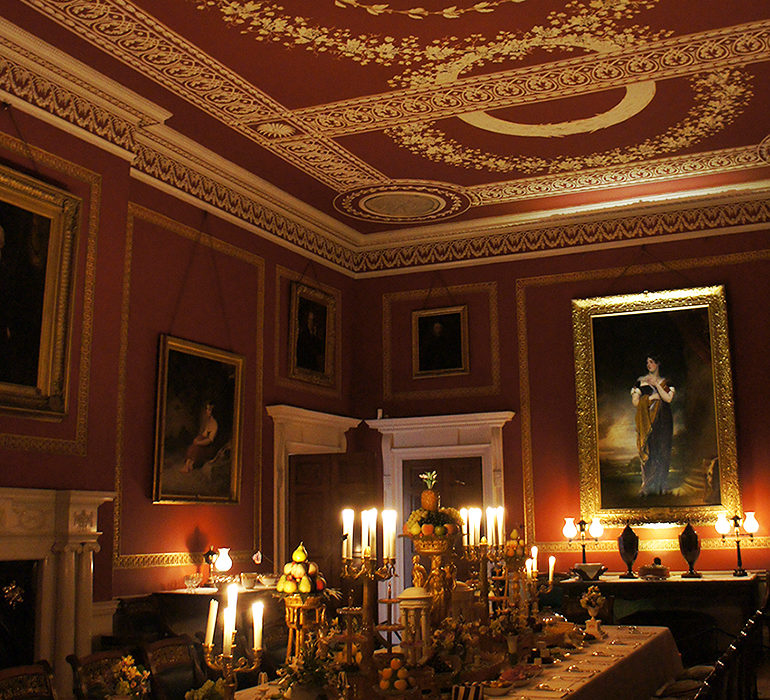 Being invited into so many private homes that are never open to the public was such a treat!

At the red brick 18th century Davenport House, we had a glorious dinner hosted by Roger and Jane Murphy. Inspired by Palladio’s Villa Mocenigo, Davenport is one of the most accurate Palladian houses in England. Beautifully adapted to the English Baroque style, the house is noted for its superb plasterwork and joinery.

We had a before-hours tour of Wightwick Manor, the late 19th century Tudor style house that contains some of the finest Arts & Crafts interiors in the world. Wightwick is filled with a plethora of William Morris wallpaper and features an important collection of Pre-Raphaelite paintings, including works by Dante Gabriel Rossetti, Sir Edward Burne-Jones, Ford Madox Brown, Elizabeth Siddal, John Everett Millais, and William de Morgan.

At Bryngwyn Hall, idyllically set overlooking lakes in an oak-studded park in the gentle rolling countryside of the Welsh Marches, we were hosted by Auriol, Marchioness of Linlithgow. Lady Linlithgow gave us a tour of her lovely late 18th century house, followed by lunch in the superb dining room.

Rupert and Ali-B Galliers-Pratt threw open the doors of their home, the jaw dropping Mawley Hall, which has some of the finest plasterwork and Baroque interiors in England. One of Mawley’s most astonishing features is Graham Rust’s 1987 Paradise Regained fresco on the ceiling of the oak drawing room, the perfect 20th century complement to the house’s early 18th century interiors. 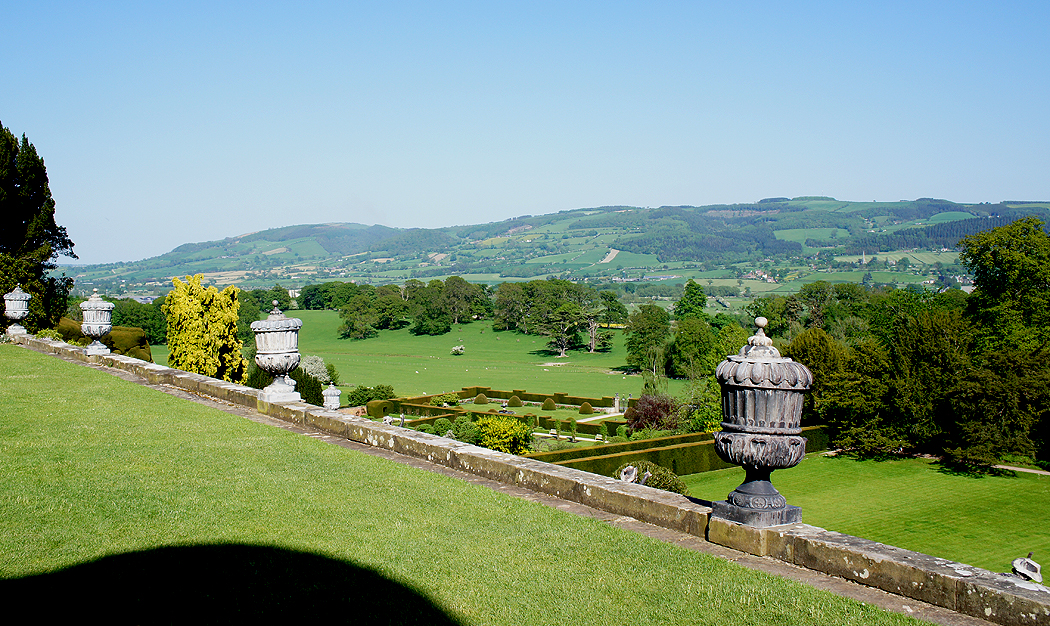 View from the Terrace, Powis Castle | Photo by Curt DiCamillo 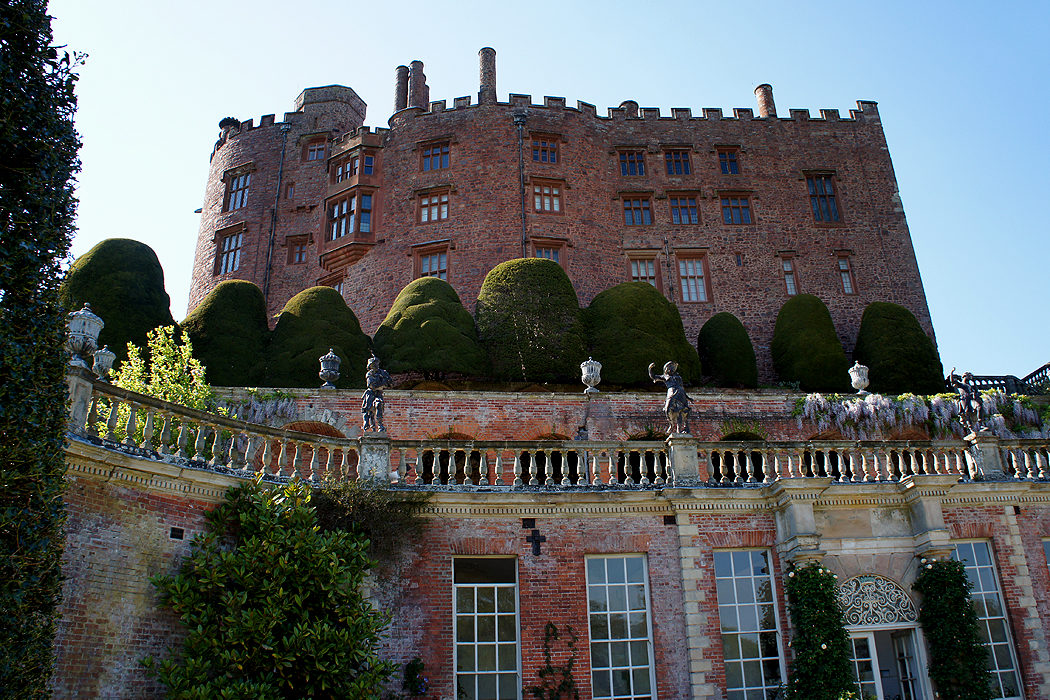 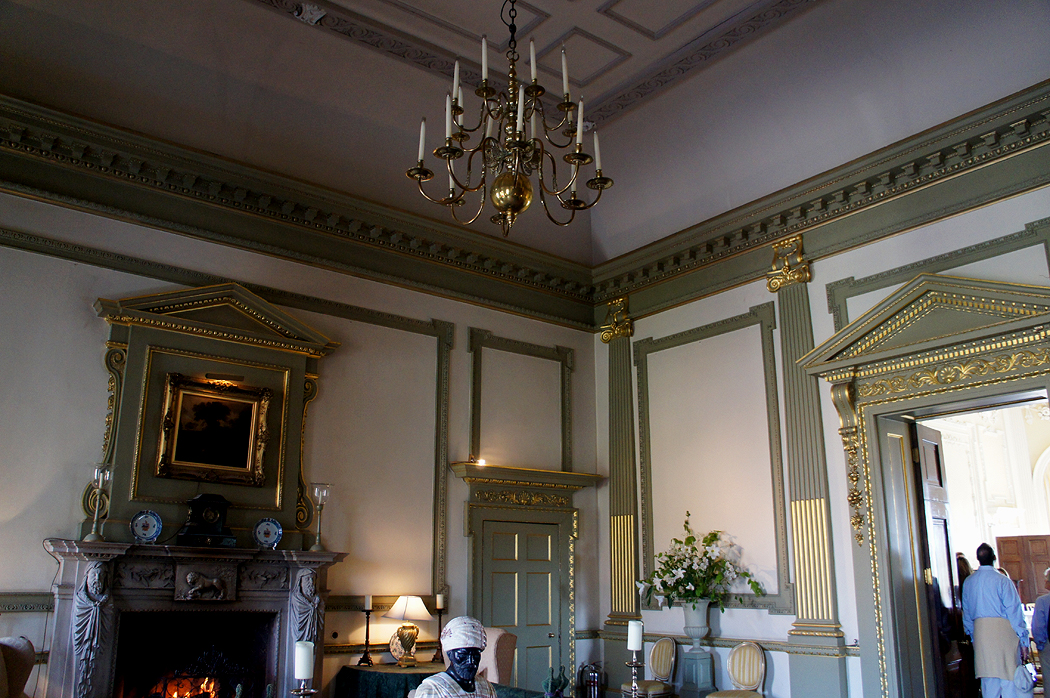 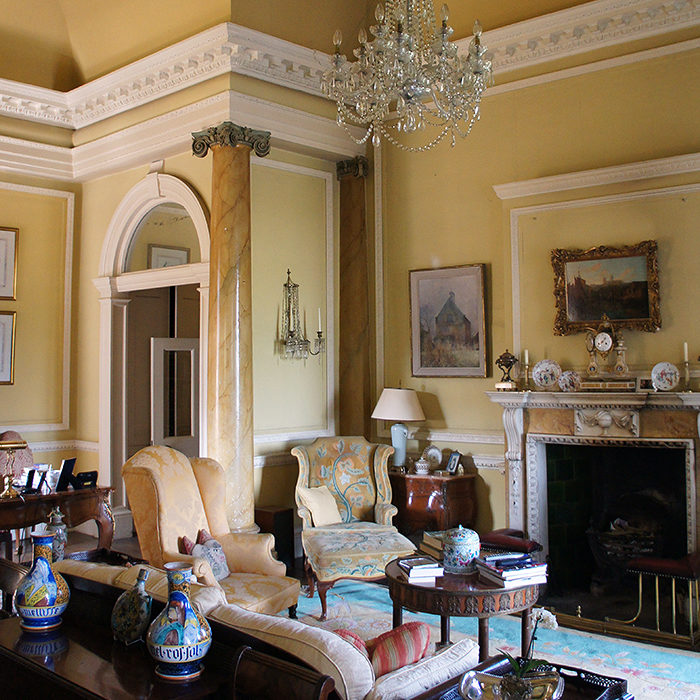 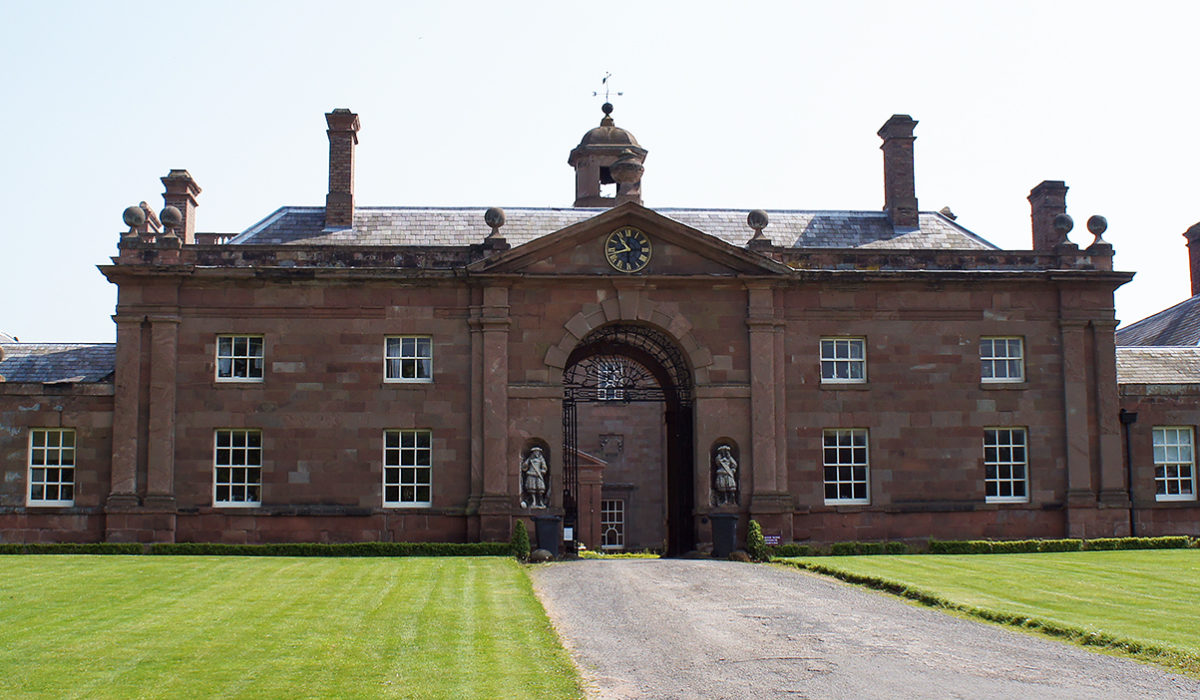 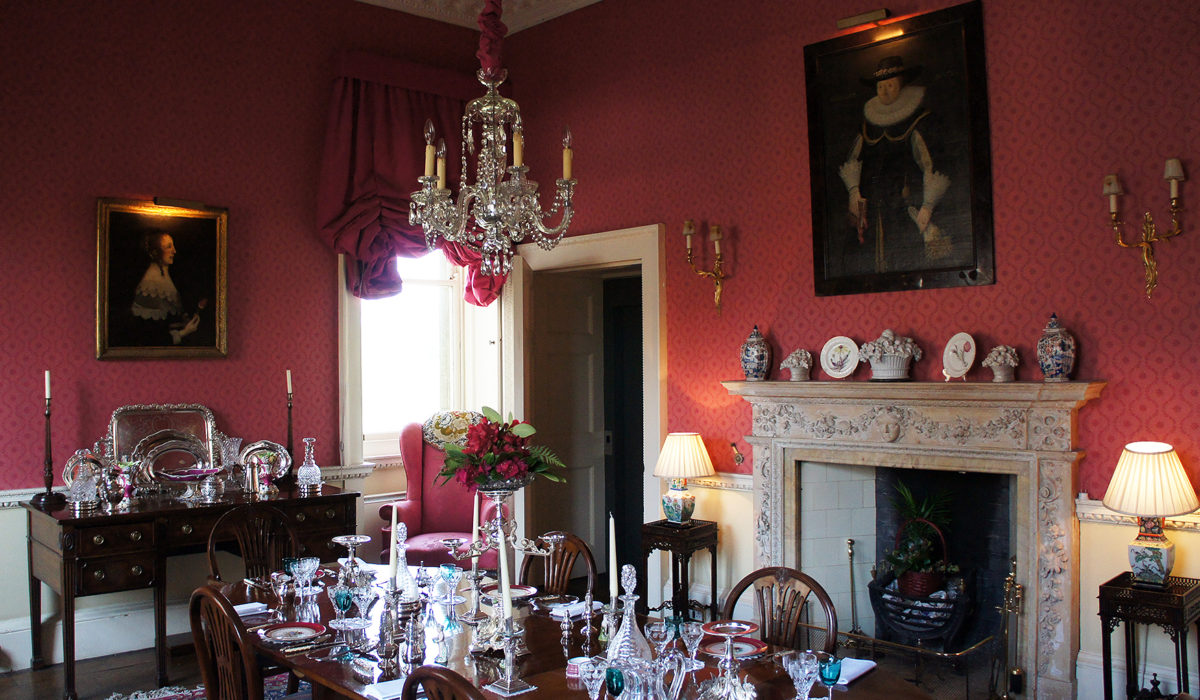 Dinner served by liveried staff on armorial porcelain in the candle-lit dining room at Chillington Hall was the highlight of the tour.