An Explosion of Beauty: Historic Houses & Gardens of the English Midlands

The English Midlands – the name conjures up images of a rural idyll dotted with historic houses and brimming with history. And it’s all true! Based at Mallory Court, a Relais & Châteaux hotel, we saw the very best of this special part of England in September of 2013 (September is the most glorious month of the year for English weather).

The tour began in London with a visit to the Brian Haughton Gallery in St. James’s, where we experienced some of the most astonishing European porcelain ever made. Hosted by Brian Haughton and Paul Crane, we saw exceptional porcelain made between the 16th and 21st centuries, followed by canapés and champagne.

Then we were on our way to Warwickshire, where Benjamin Wiggin hosted us at his family’s home, Honington Hall, considered one of the most perfect late 17th century houses in England. Built of an exquisite, mellow red brick with stone quoins and carved busts of Roman emperors set into round-headed niches, Honington’s interiors are noted for their early Georgian plasterwork of the highest quality, particularly in the breathtaking coffered, domed octagonal saloon.

Steven Parissien, director of Compton Verney, gave us a tour of one of the finest collections of art in the Midlands, today housed in the ancestral home of the lords Willoughby de Broke, who were here from 1440 until 1921. Today Compton Verney House contains a fine collection of art formed by Sir Peter Moores, including Neapolitan paintings, Northern European works of art, British portraits, British folk art, and Chinese bronzes. 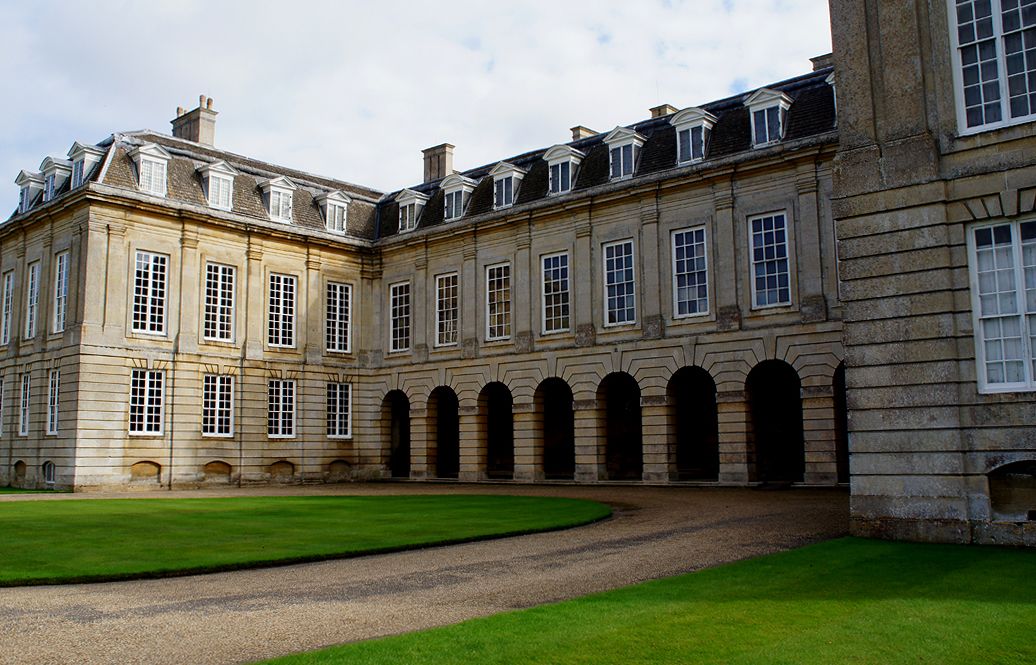 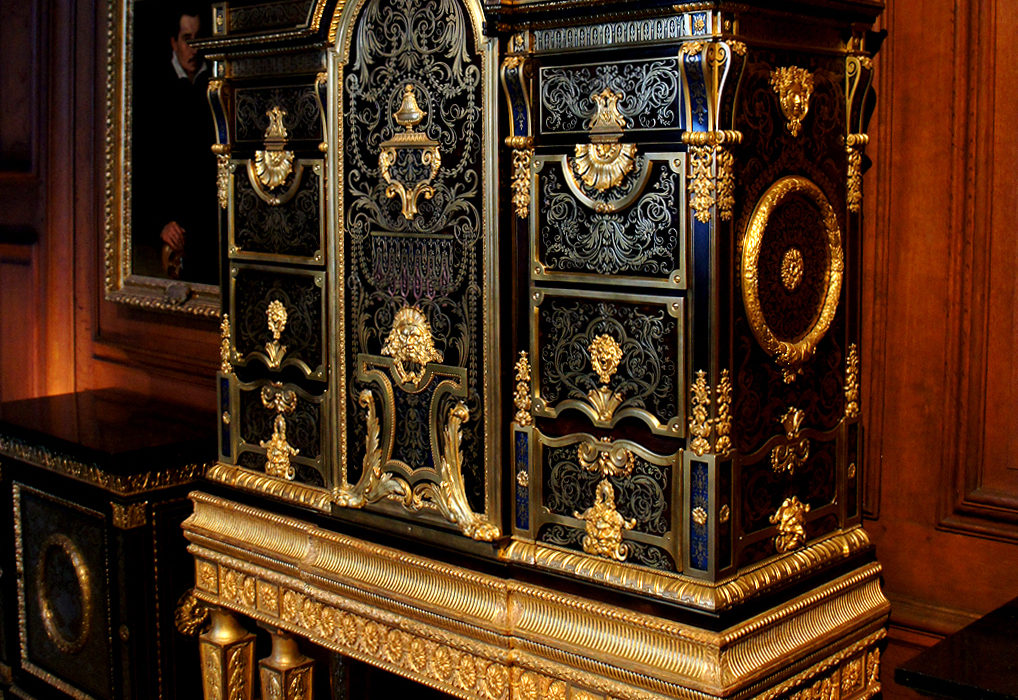 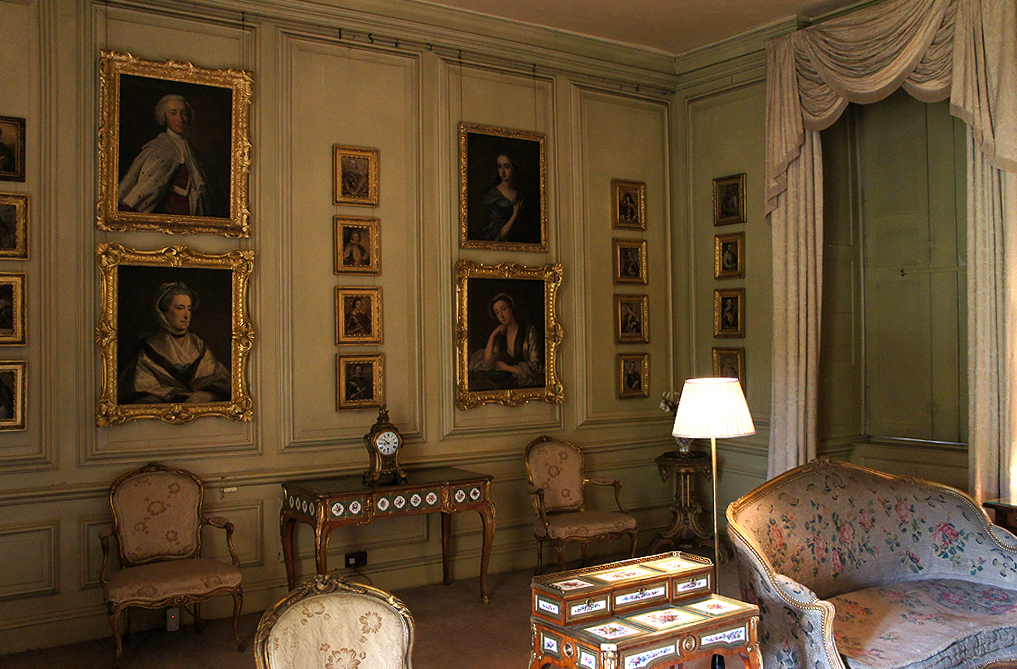 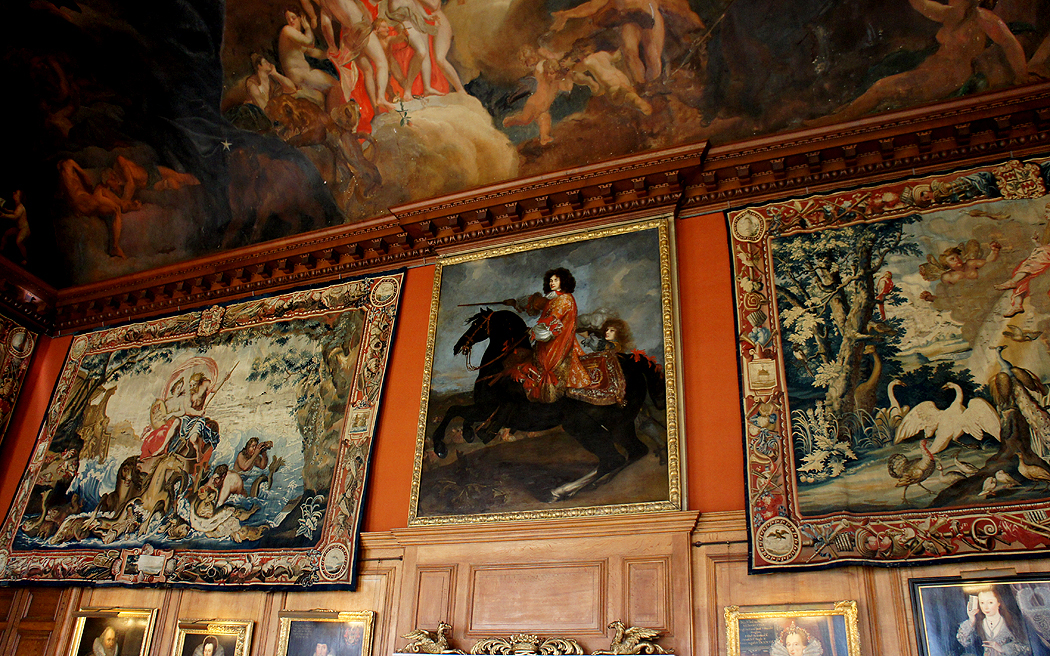 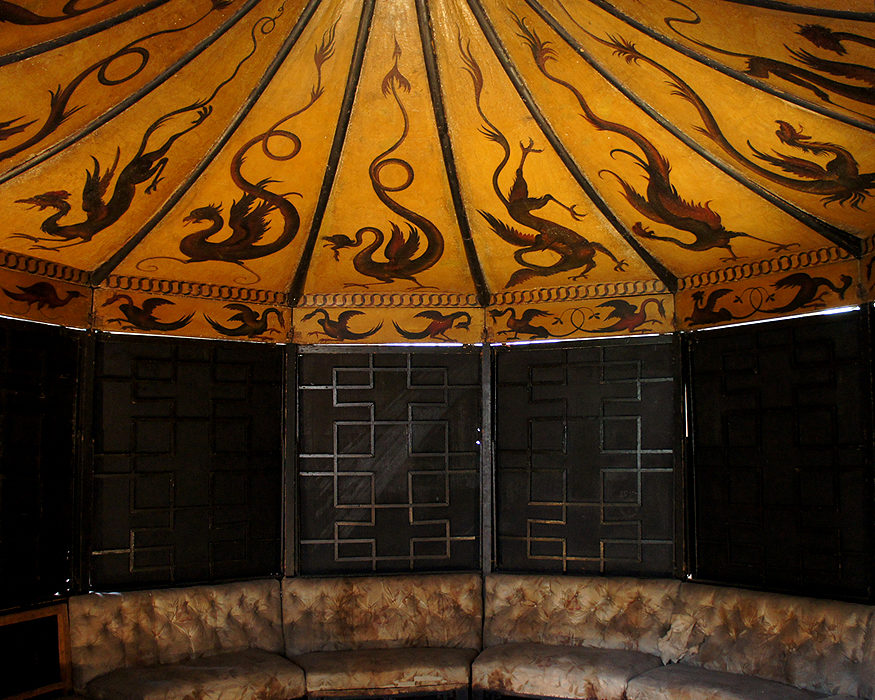 At Rousham Park we saw one of the best examples in the world of an English landscape garden, built around the 17th century house of the Cottrell-Dormer family, whose home it remains today. In the 1730s one of England’s premier early 18th century landscape designers, Charles Bridgeman, laid out the gardens at Rousham in the new naturalistic style of landscape design. Overlooking a curve of the River Cherwell, Bridgeman’s design populated the garden with meandering walks through the woods punctuated with pools and statuary. This was enhanced in the mid-18th century by William Kent, who left Rousham’s garden as it’s seen today.

One of Sir John Soane’s masterpieces, Moggerhanger Park, with grounds by Humphry Repton, was thrown open to us for a gloriously detailed tour. Moggerhanger almost didn’t make it into the 21st century. For most of the 20th century it was owned by Bedfordshire County Council, who used the house a sanatorium for TB patients, and later as an orthopedic hospital. After the hospital closed in 1987, Moggerhanger was acquired by a developer, who planned to build additional houses in the grounds, but who had no use for the main house. The great Soane house was saved by the newly-formed Moggerhanger House Preservation Trust, which obtained £4.5 million in grants to begin the restoration of the house and grounds.

At Deene Park, the ancestral home of the earls of Cardigan, we had a glorious dinner hosted by the current generation of the family, who also gave us the perfect tour. Deene, which has been the seat of the Brudenell family since 1514, is most notable for the Brudenell Library. This important library was begun in the 16th century by Sir Thomas Tresham and his son-in-law, Sir Thomas Brudenell, 1st Earl of Cardigan. Though no longer in the library, the collection was famous for its manuscript of Chaucer’s Canterbury Tales and the last copy of Magna Carta in private hands.

Honington Hall was one of the most divine houses I've ever seen: perfect proportions, grand, but livable, interiors, and a glorious art collection. The domed octagonal saloon was a bit of paradise.

Some of the most magical moments were at Wrest Park, most famous today for its glorious gardens. The house was built between 1834 and 1839 to the designs of its owner, Thomas de Grey, 2nd Earl de Grey, a lover of beauty and design, an amateur architect, and the first president of the Institute of British Architects. During trips to Paris de Grey was inspired by French architecture and became determined to build a French style house on his estate in Bedfordshire, which is why Wrest Park has some of the earliest Rococo Revival interiors in England.

It’s hard to think of any house in England that is more impressive than Boughton House, one of the ancestral homes of the dukes of Buccleuch. This amazing house, called “The English Versailles,” contains possibly the finest collection in Britain of 18th century French furniture, in addition to  sumptuous tapestries and carpets, astonishing Sèvres, breathtaking painted ceilings, and 40 van Dyck grisailles — making it one of the most important treasure houses in Europe. Dame Rosalind Savill, the world’s foremost Sèvres authority, gave us a hands-on experience of Boughton’s French porcelain, after which we had lunch in the French style stables. 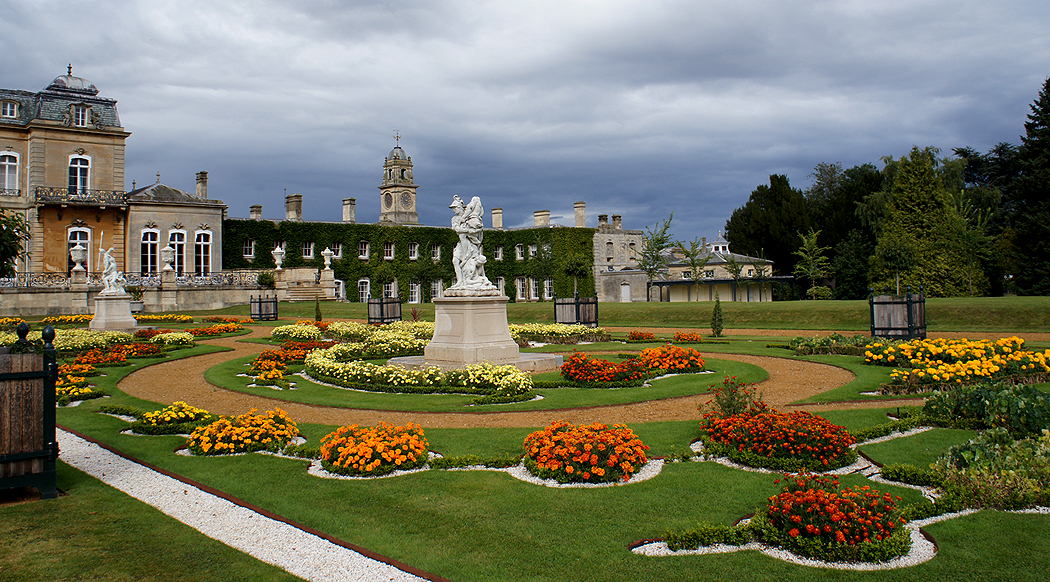 The House from the Garden, Wrest Park | Photo by Curt DiCamillo 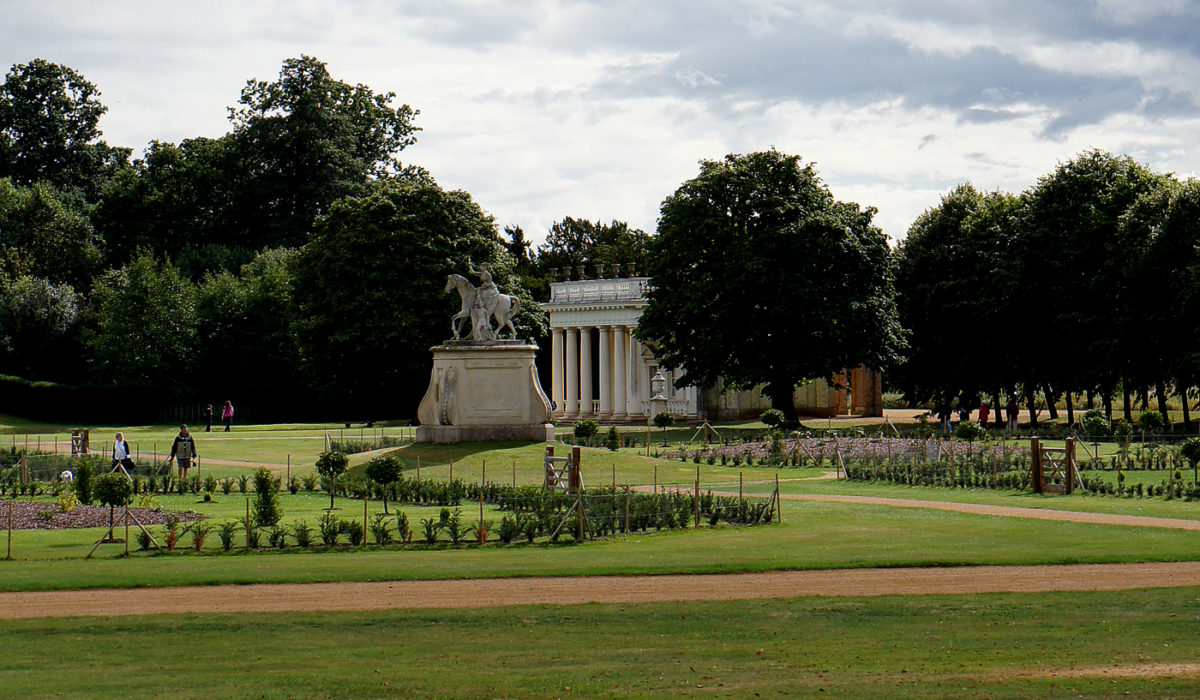 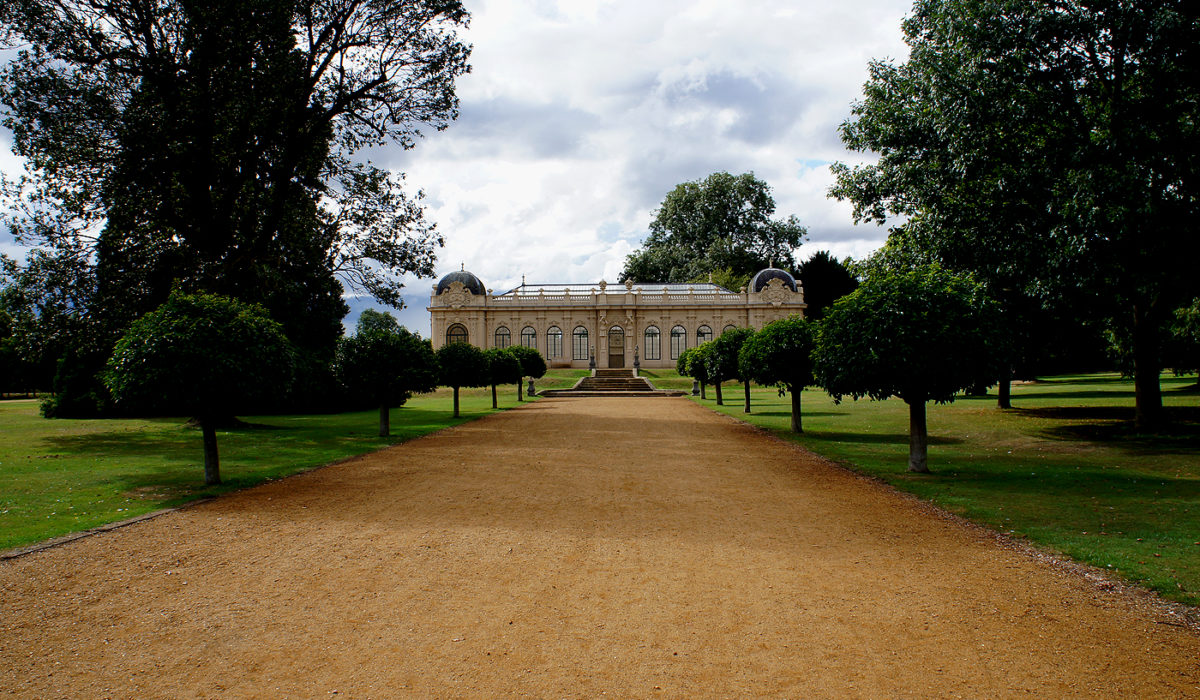 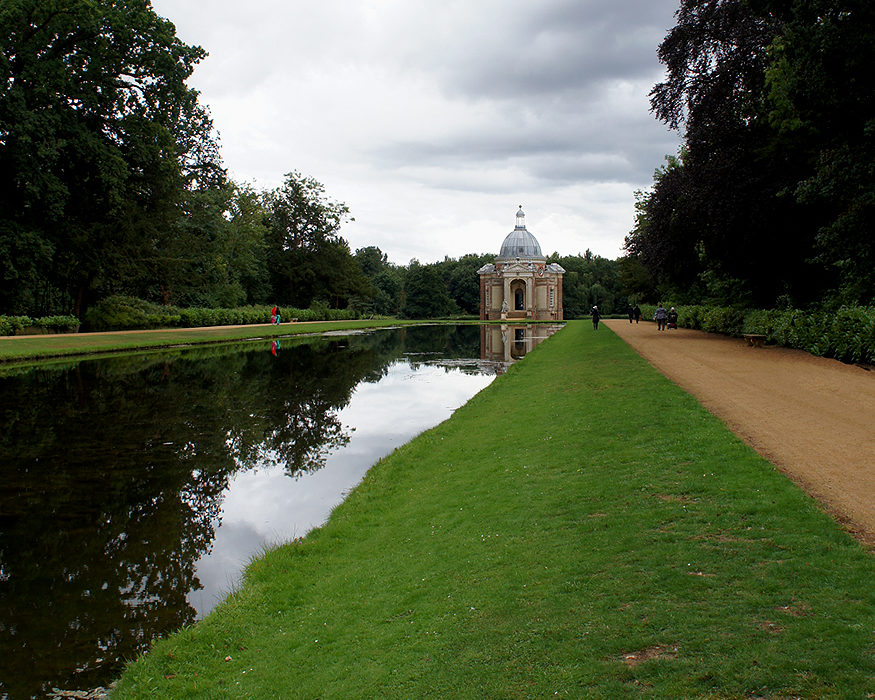 The Canal and the Archer Pavilion, Wrest Park | Photo by Curt DiCamillo 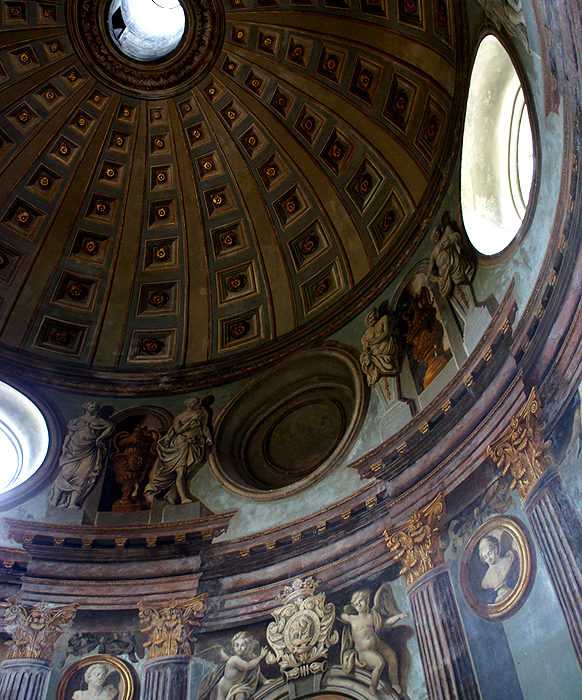 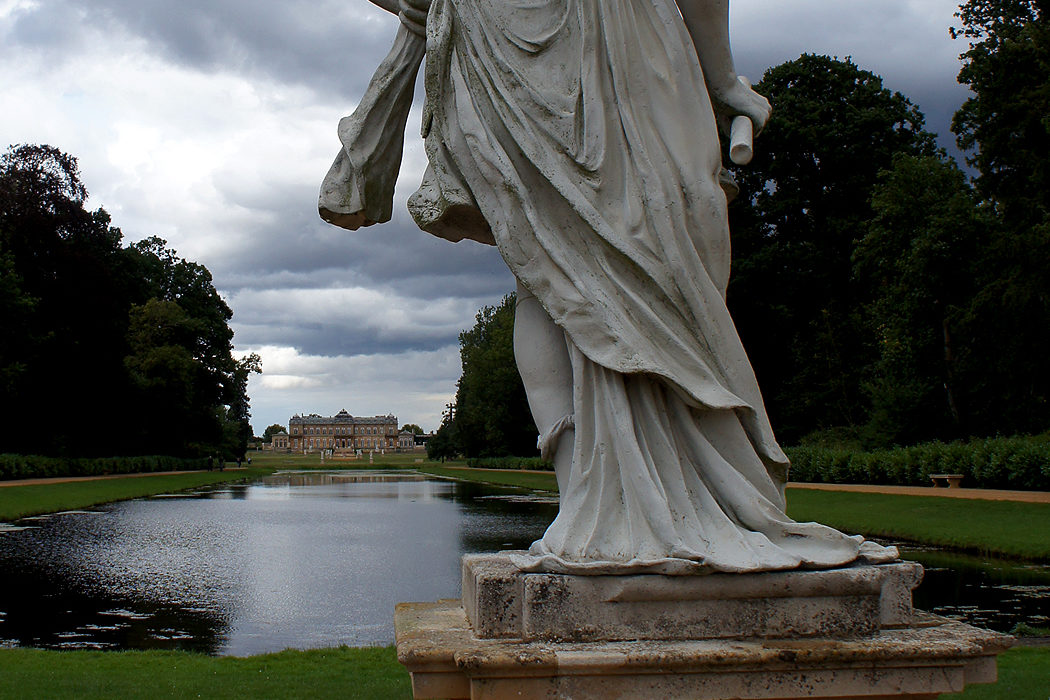 View of the House from the Archer Pavilion, Wrest Park | Photo by Curt DiCamillo 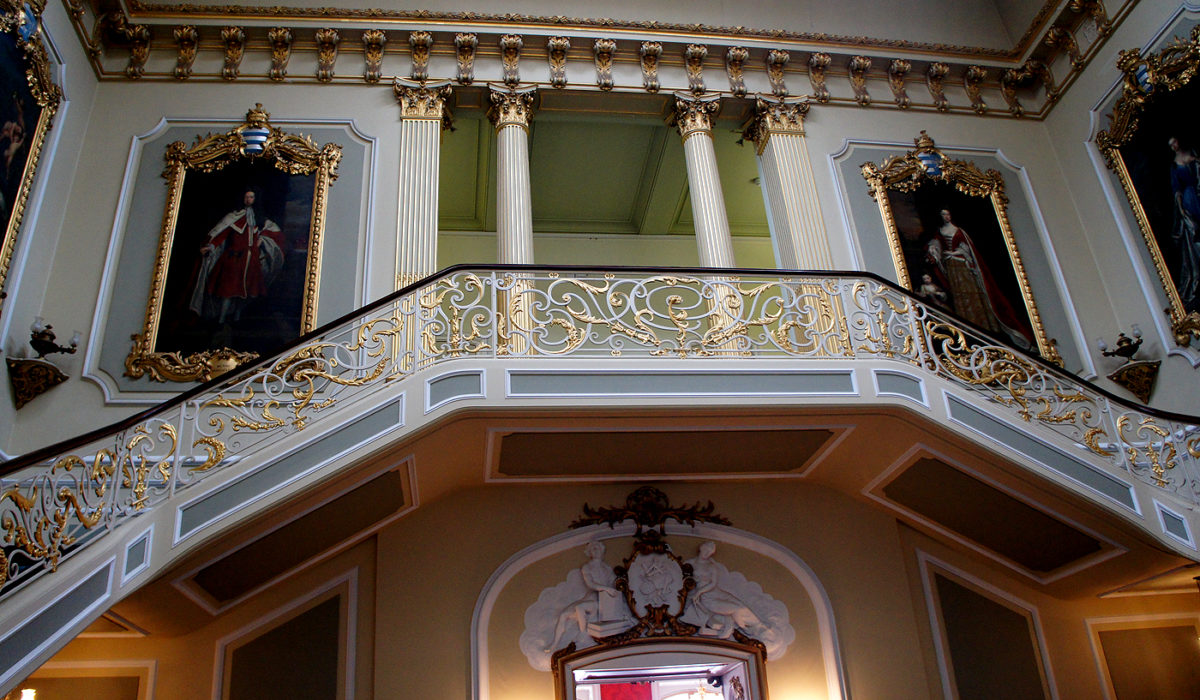 It is astonishing to me that this small country boasts art and architecture on such a rich scale. Certainly no other nation, mile-for-mile, can compare to England.

Nikolaus Pevsner described Kelmarsh Hall as “a perfect, extremely reticent design…done in an impeccable taste.” Completed in 1732 for William Hanbury, a famous antiquarian, Kelmarsh is a perfect red brick English Palladian house. Built by Francis Smith of Warwick, working from a design by the famous James Gibbs, Kelmarsh is famous today as the home of designer Nancy Lancaster, who restored the house in the early 20th century. After a tour of the delightful house, we had a luscious lunch in one of Kelmarsh’s state rooms.

Built in the early 18th century, Stoneleigh Abbey is considered the finest work of its architect, Smith of Warwick. Nikolaus Pevsner described the enormous house as “the grandest and most dramatic Georgian mansion of Warwickshire.” Possibly most famous today for its connections to Jane Austen (the Austens were related to the Leighs of Stoneleigh and it’s very likely that Jane was inspired to include a fictionalized version of Stoneleigh in her novels), the house was built on the site of a 12th century Cistercian abbey. Here we had a tour of the state rooms, followed by dinner in the orangery.

And then there was Burghley House, one of the supreme examples of 16th century power house architecture. Originally built in the shape of an “E” in honor of Queen Elizabeth by her closest advisor, William Cecil, Lord Burghley, the house remains in the ownership of his descendants today. Here we had a fabulous tour led by Burghley’s curator, Jon Culverhouse, that highlighted one of the finest private collections of 17th century Italian paintings in the world and featured an exceptional chance to handle a rare collection of 17th century jeweled objects. We ended our visit with a gourmet lunch sourced from the Burghley Estate hosted by Miranda Rock, granddaughter of David Cecil, 6th Marquess of Exeter. 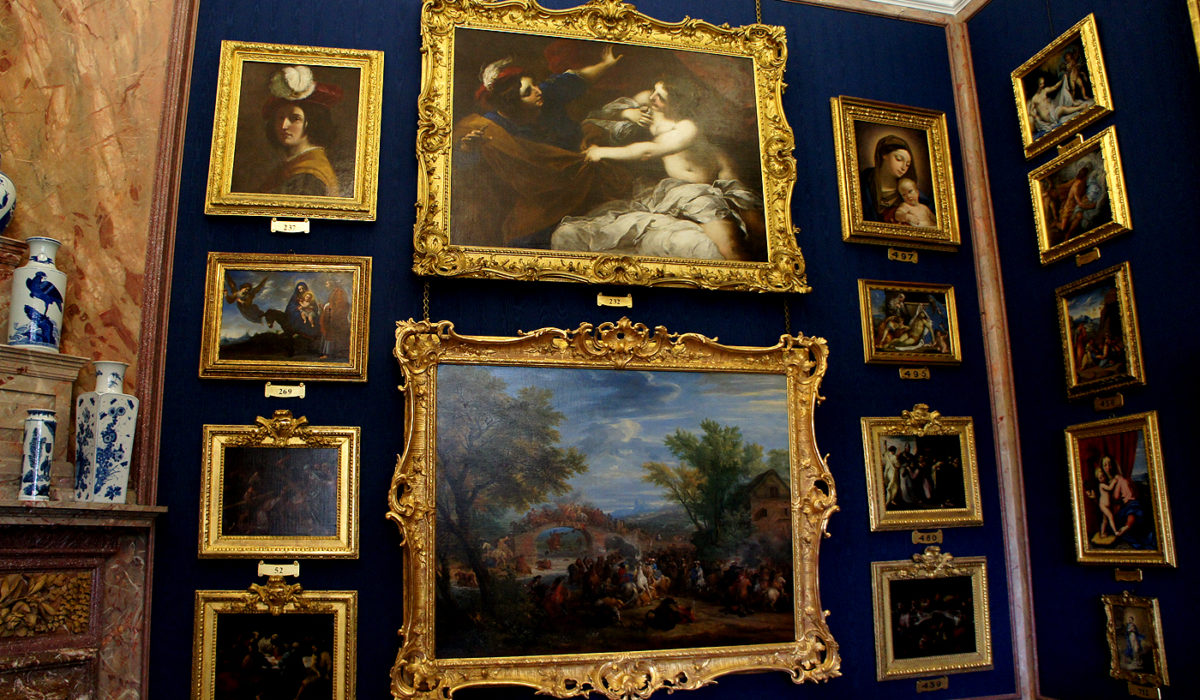 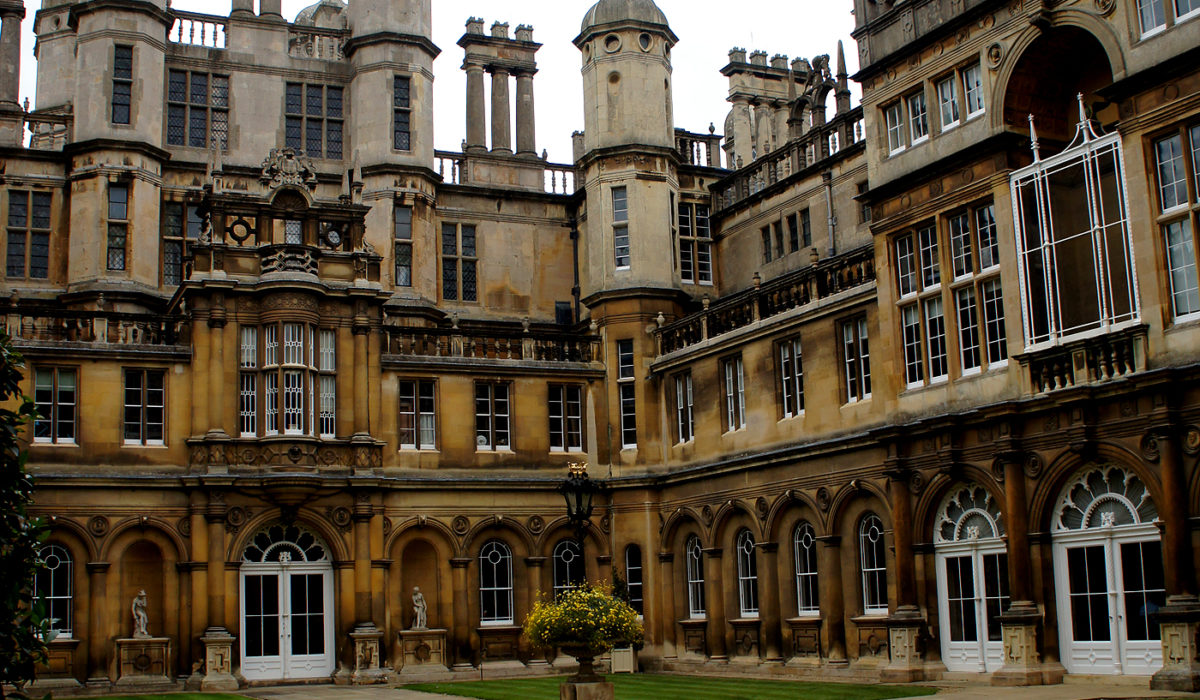 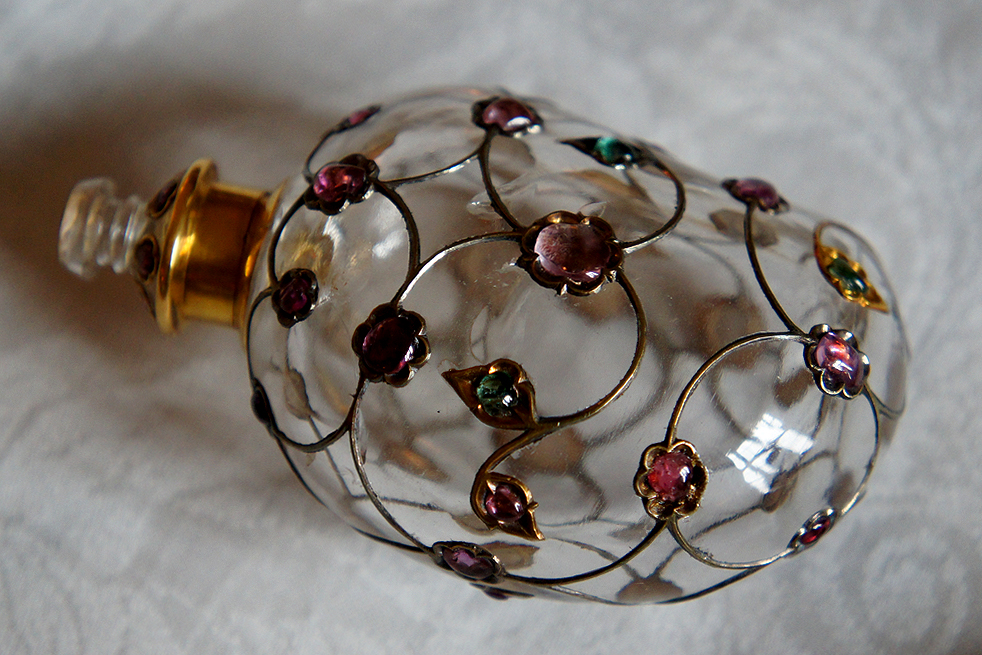 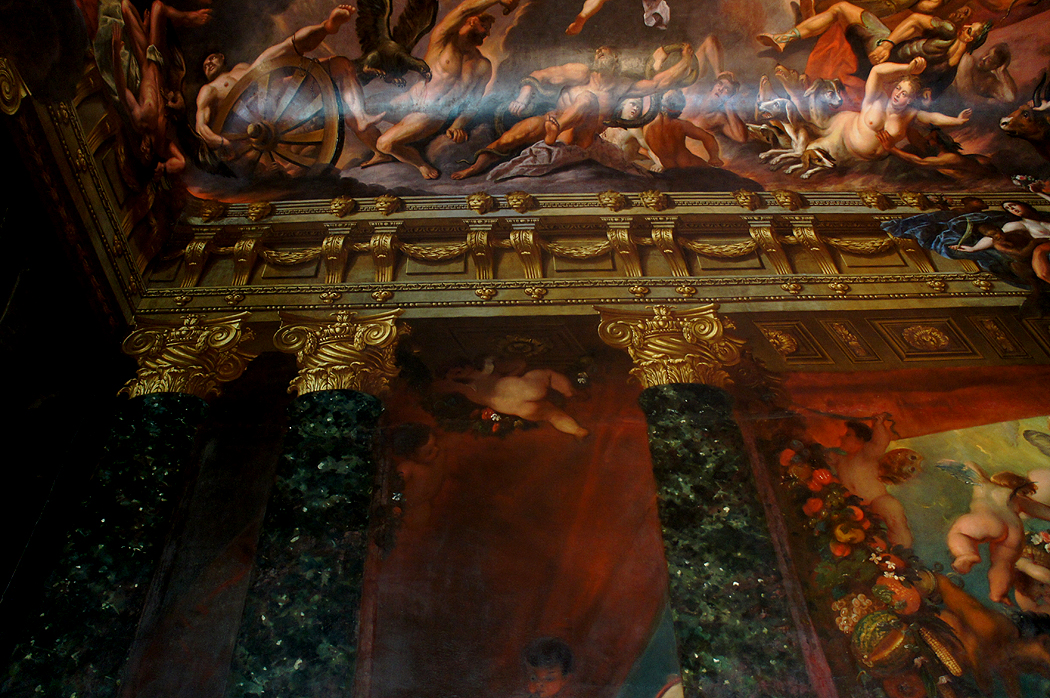 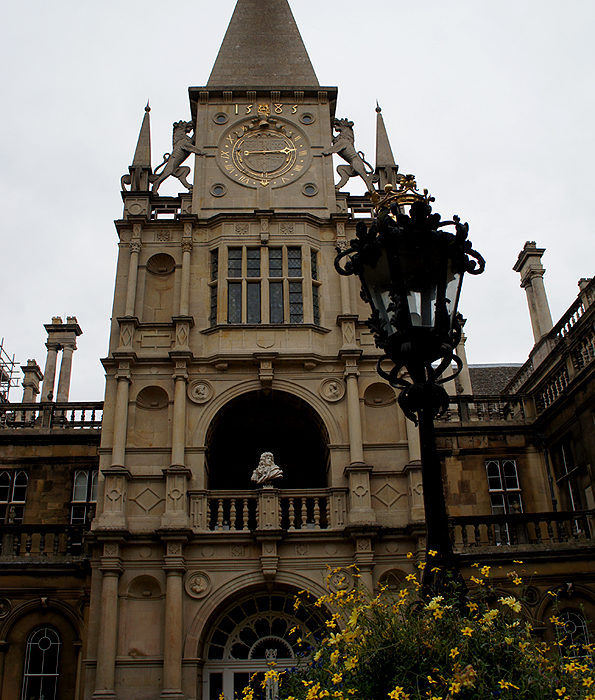 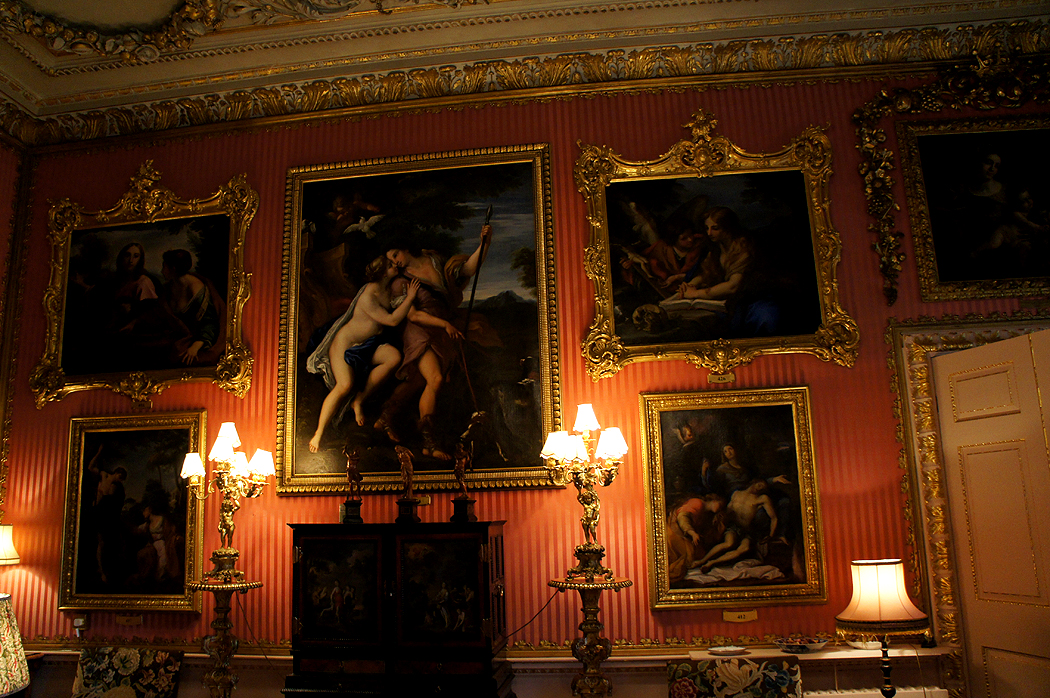 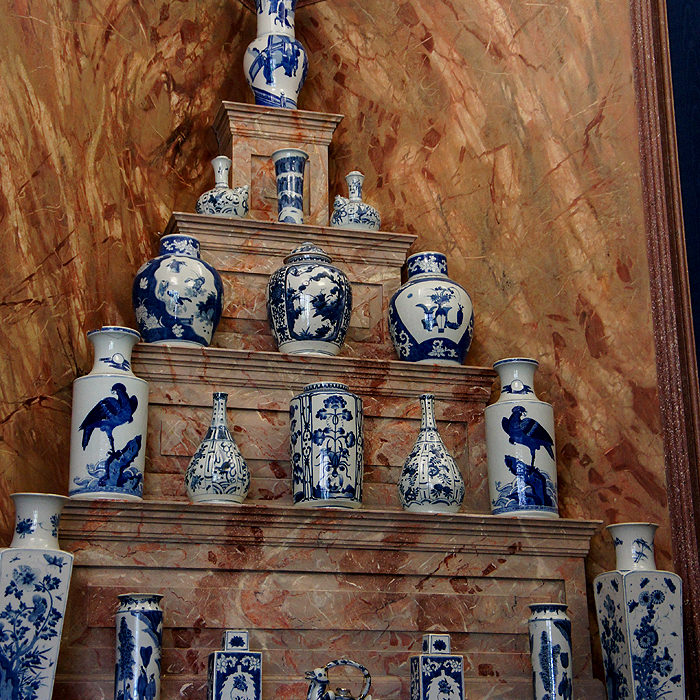 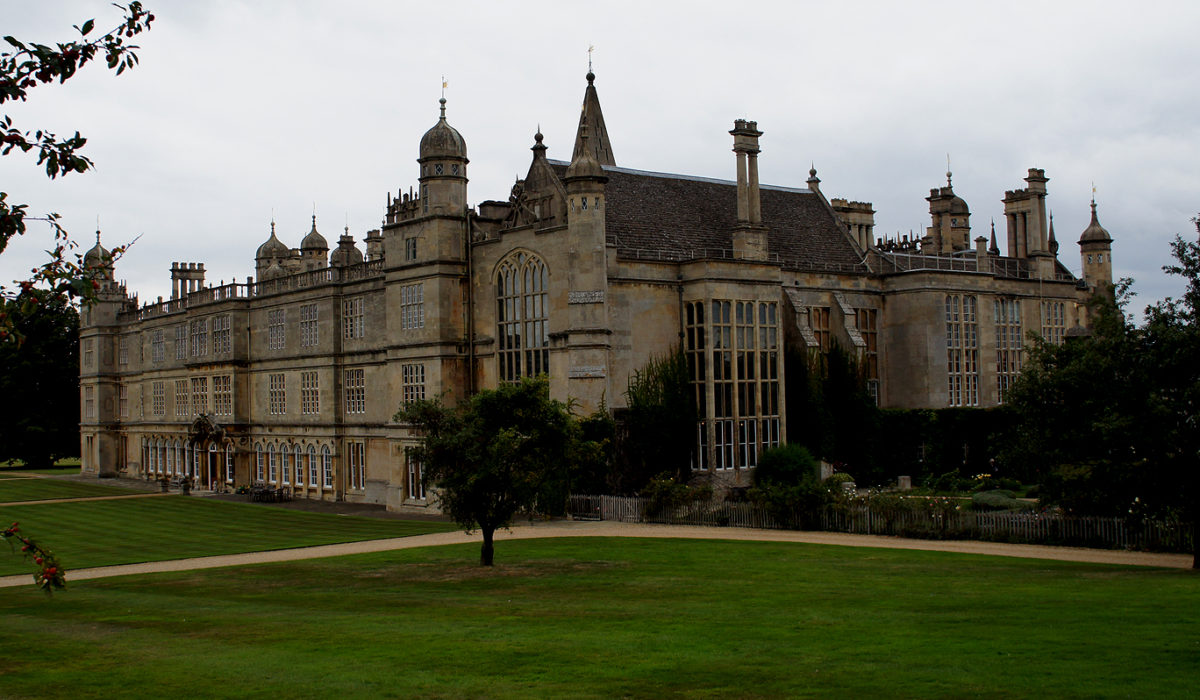 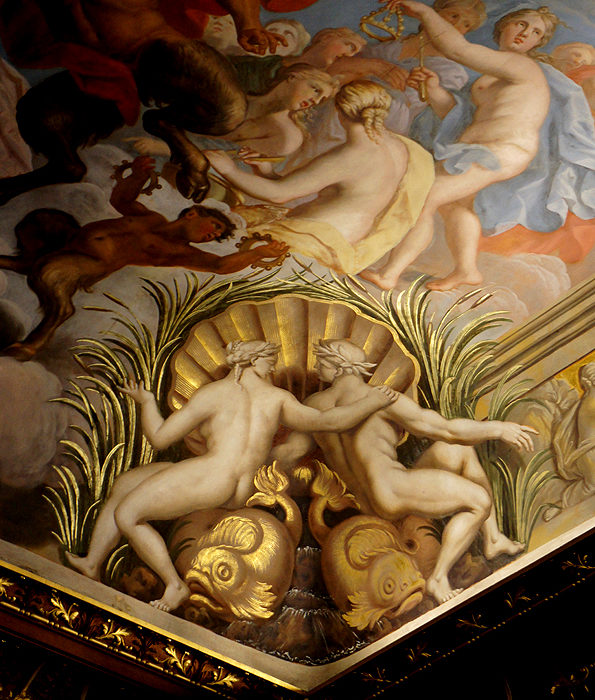 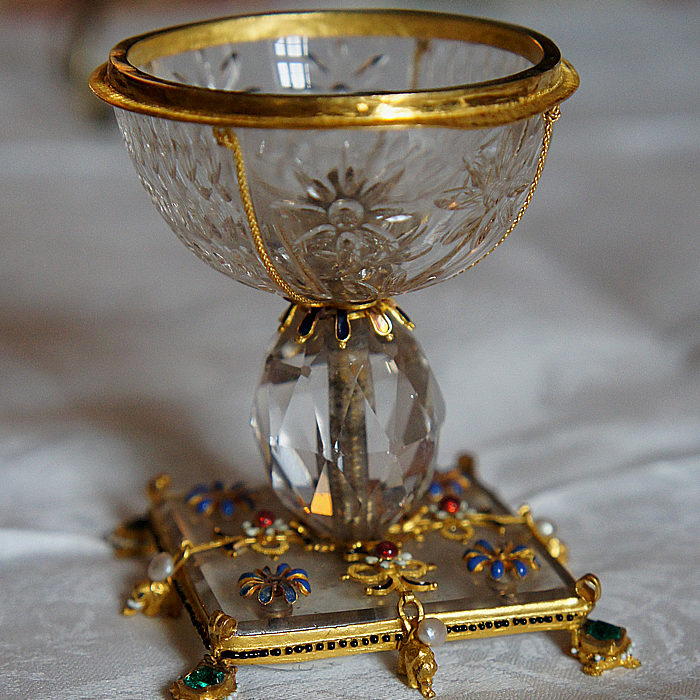 Burghley House was so amazing that words fail me. I could go back again and again.